Hundreds of lucky winners are taken to a remote island where they will be treated to a weeklong stay at the Paradise Club, one of the world’s most exclusive and luxurious resorts, all-expenses paid. The only compromise is that they are to be veritably cut off from society, their phones taken from right as they step out of the ferry. But that’s a small price to pay for a stay in paradise, isn’t it?

Things, of course, turn out too good to be true. The would-be vacationers soon learn that the island is to be the stage for the Skirmish: a game that pits the world’s most bloodthirsty killers against all the innocent, unsuspecting tourists.

Paradise Club is a fun little summer slasher that could have been great if all the interesting (and interestingly eldritch) twists and turns the story took amounted to anything other than the most abrupt of finales. An ending that makes sense only after you read the author’s note which talks about how the book came to be written, but as its own stand-alone thing, I couldn’t help but be disappointed. Especially considering that this only needed an additional chapter or two to have a more satisfactory denouement.

As it stands, it’s still an enjoyable read. I appreciate how Meyer wastes no time with the story, the plot of which is up and running almost as soon as we’re on the island and have met a handful of its visitors. He hooks you quickly as a reader, and keeps your attention by featuring an increasingly outrageous cast of killers who do their dirty, morbid deeds in increasingly outrageous, barbaric acts. This is one unflinchingly gory book, so fair warning to those of you who like your horror with a little less blood and guts.

Well this was certainly a wild something something.

Delivering exactly what it says on the tin, Kristopher Rufty’s Bigfoot Beach is a gory (so gory), over-the-top (so over-the-top) summer slasher that happens to feature a colossal cryptid in lieu of a murderous maniac.

While I can certainly see the appeal for these kinds of stories, at the end of the day it just wasn’t for me. Despite its characters being considerably more fleshed out than in the standard Syfy creature feature fare, it never rose above its schlocky horror movie premise enough for me to fully engage with it. I had a lot of issues with it, mostly in terms of the writing and plotting, which is fine and serviceable for most of the book but then would go on these truly baffling tangents (mostly of the sexual kind, which I understand often comes with the territory in these types of stories, but it kept popping up in sequences where it had no business popping up — for instance, having a character who has just witnessed an old friend being torn apart immediately ogle a woman’s behind for a paragraph or two).

Still, Rufty does have a knack for going all out with the action set-pieces here, which are fun and ludicrous and chockfull of imaginative, gruesome kills and honestly sometimes that’s all you really want out of a monster book.

Firmly following the paths forged by Goosebumps so long ago, Camp of No Return, the fourth entry in J.H. Reynolds’ Monsterstreet series, is a short read that packs more wild twists and turns than most books twice its size.

Harper is among the lucky kids chosen to attend Camp Moon Lake, a legendary, exclusive and secretive summer getaway. She’s looking forward to getting away from her parents, who may be getting a divorce*, but also because the camp boasts every attraction and activity a kid could dream of — suggesting more a theme park than a campground. But once they get there the campers are met with a thick fog that envelopes the campus, and Harper, along with pop culture enthusiast and spooky storyteller Brodie, will soon find that there is something far more sinister hidden under the gloom.

This is the first of this series that I’ve picked up, because summer vibes, so I can’t speak as to the quality of the other books (which, luckily, seem to be standalone stories and can be read out of order), but Camp of No Return is a goofy, fun, simple tale that, while it breaks no new ground, it proudly holds up the tradition established by Goosebumps and all the other middle grade horror series that haunted the nineties. It’s evident just how much of a blast Reynolds had writing this, and his enthusiasm is infectious. It’s meant to be read in short, quick bursts late into the night, like a story being told around a campfire. Which is exactly how I went about it.

* Curiously, the second camp-themed book I’ve picked up that features a protagonist with parents going through divorce. 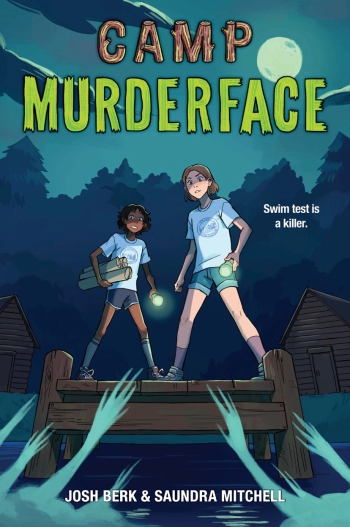 Camp Murderface follows Corryn Quinn and Tez Jones as they are heading to Camp Sweetwater for the summer. Enthusiastically, at first: Corryn wants to put some distance between her and her soon-to-be-divorced parents; Tez wants a break from his overbearing, overprotective parents. Their enthusiasm soon evaporates into the ether, though, as they quickly find that the macabre myths surrounding the camp may be more than true.

“This place is cursed,” he says, not looking at me. He stares deep into the distance. I waggle my eyebrows. “Look on the bright side. Curse is just another word for magic,” I say.

Reading Josh Berk and Saundra Mitchell’s foray into the world of middle grade horror was just an absolute blast. Like most of my favorite middle grade novels, it reminded me of the stories I consumed (and was consumed by) in my childhood, while simultaneously feeling thoroughly modern, with witty, whip-smart characters, and incredibly vivid, chilling imagery. Corryn and Tez shine as protagonists, and their budding friendship is one of the most realistically realized portrayals I’ve read in recent memory. It helps that both Berk and Mitchell are great at writing kids: Corryn and Tez read like real, actual preteens — down to being entirely too clever and perceptive for their own good at times.

But I must make special note of the imagery mentioned above. Mitchell and Berk write brilliantly eerie visuals, with some passages being striking enough that they would not feel out of place in, say, one of the more particularly lurid entries in the Fear Street series.

The nurse stands in front of the sink, frighteningly still. She hunches over it, her shoulder blades so sharp that they look like broken wings. And that’s not all that’s wrong with her. Her hair is loose and wet. It hangs heavily around her head. Dark, wet beads slip from her hair onto the floor, all the way around her.

The drops puddle on the floor around her feet, forming a dark lake. Too dark to be water. It’s not water. It’s deep red. It’s—

Excellent, creepy goodness all around. Summer Spooks is off to a great start.