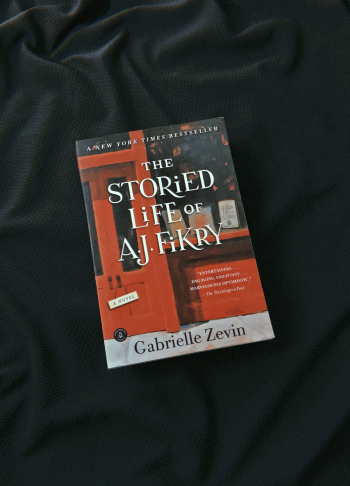 𝑻𝒉𝒆 𝑺𝒕𝒐𝒓𝒊𝒆𝒅 𝑳𝒊𝒇𝒆 𝒐𝒇 𝑨.𝑱. 𝑭𝒊𝒌𝒓𝒚 by Gabrielle Zevin is a maudlin, overly sentimental affair with a contrived, predictable plot riddled with clichés and tropes that it embraces rather than trying to subvert. At times it is so full of melodrama that it reads like the bookish equivalent of a film that is trying its very best to bait an Oscar.⠀
⠀
And good grief did I buy into it hook, line, and sentimental sinker like a sucker. Did I love every single page of it all.⠀
⠀
Every description of this book makes it sound insufferable, but Zevin — much like she does to her characters — pulls the rug out from under us by positively filling it up to the brim with a charming, endearing and painfully human cast that you fall in love with almost immediately. I loved the experience of reading this story, and can easily see myself revisiting over the years.

So it’s been a minute! I’ve been mostly MIA lately, dealing with tedious adulthood type stuff. The sort that requires entirely too much of my energy and attention. And although thankfully none of that has really stopped me from reading, it’s been definitely draining any desire to sit down and write anything of note. Tragic, I know.⠀
⠀
It’s also caused me quite a fair bit of stress! Which is probably why I’ve resorted to picking up a bunch of middle grade books these past few weeks. They’ve long been a comfort read for me, so of course they’ve helped with winding down and staving off concerns.⠀
⠀
It’s sort of funny, then, that the first few books I went to were Raina Telgemeier’s graphic memoirs, which are all about the peculiar anxieties of childhood. ⠀
⠀
I started reading Telgemeier’s work only a couple of years ago, but she quickly turned into one of my favorite authors. She writes the types of books I wish my younger self would have been able to read, which is something I say about every excellent modern middle grade book I read these days but it happens to be particularly true in the case of these graphic novels: they may me about incredibly specific events that happened to a white girl growing up in the West Coast during the late eighties and early nineties, but I still manage to see my life reflected in these pages. Still see the same childhood concerns and the adolescent angst that I went through as an anxious brown kid growing up in the Caribbean in the nineties. They make me feel seen in a way, and that brings me comfort. ⠀
⠀
Stories, you guys — the way they work never fails to amaze and astound me.⠀
⠀
Anyway.⠀
⠀
I got my copy of 𝘎𝘶𝘵𝘴 right when it was released so of course there’s no Eisner Award sticker on the cover. Telgemier is an unstoppable talent, though, so if you purchase the book today it will be there.

Reading Noelle Stevenson’s 𝑻𝒉𝒆 𝑭𝒊𝒓𝒆 𝑵𝒆𝒗𝒆𝒓 𝑮𝒐𝒆𝒔 𝑶𝒖𝒕 was a cathartic affair. I picked it up during a particularly demanding week, emotionally speaking, in my life, and found a lot of the emotions I was experiencing at the time (good, bad, unseemly) echoed in this book. It helped give many of these messy feeling some semblance of shape and form, which in turn made me feel less like a vulnerable blob just floating in the void.⠀
⠀
It was also a slightly surreal experience in the sense that this book is essentially a candid glance behind the curtains of a career and life of someone whose work has provided you with a great deal of amusement and delight over many years and, despite knowing that compassionate and lively art can come from grief and hardship, seeing it depicted in such a frank and vulnerable manner can still be somewhat of a shock to the system. The raw, intimate vignettes collected in this volume are as surprising and startling as they are engaging and illuminating.⠀
⠀
𝑻𝒉𝒆 𝑭𝒊𝒓𝒆 𝑵𝒆𝒗𝒆𝒓 𝑮𝒐𝒆𝒔 𝑶𝒖𝒕 is a portrait, and a work in progress at that, in the truest sense of the term. It’s honestly been a privilege to watch Stevenson’s work grow all these years, and hope I get to see it evolve even further.⠀
⠀
⠀
𝘁𝗿𝗶𝗴𝗴𝗲𝗿 𝘄𝗮𝗿𝗻𝗶𝗻𝗴𝘀: 𝘀𝗲𝗹𝗳-𝗵𝗮𝗿𝗺, 𝗯𝗼𝗱𝘆 𝗶𝗺𝗮𝗴𝗲 𝗶𝘀𝘀𝘂𝗲𝘀, 𝗺𝗲𝗻𝘁𝗮𝗹 𝗵𝗲𝗮𝗹𝘁𝗵 𝗱𝗶𝘀𝗰𝘂𝘀𝘀𝗶𝗼𝗻𝘀, 𝗵𝗼𝗺𝗼𝗽𝗵𝗼𝗯𝗶𝗮, 𝗿𝗲𝗹𝗶𝗴𝗶𝗼𝘂𝘀 𝗰𝗼𝗻𝘁𝗲𝗻𝘁, 𝗺𝗮𝘀𝘀 𝘀𝗵𝗼𝗼𝘁𝗶𝗻𝗴 𝗺𝗲𝗻𝘁𝗶𝗼𝗻

Well this seems like the perfect time to revisit this most surreal superhero comic.⠀
⠀
Along with seemingly the rest of the world, I caught the first two episodes of 𝘞𝘢𝘯𝘥𝘢𝘝𝘪𝘴𝘪𝘰𝘯 over the weekend. And I thought they were fine! A little clunky, perhaps, although I suppose it’s to be expected given that the show is the MCU’s opening stride into uncharted territory. But I love the concept of the thing, which is weird enough and new enough for me to not support the endeavor.⠀
⠀
It helped that the series definitely seems like it’s inspired by the 2015 run of 𝑻𝒉𝒆 𝑽𝒊𝒔𝒊𝒐𝒏 by Tom King, Gabriel Hernández Walta and Jordie Bellaire, which still stands as one of my favorite comics in the last few years. Like 𝘞𝘢𝘯𝘥𝘢𝘝𝘪𝘴𝘪𝘰𝘯, it views our titular character through a domestic lens, although the effect in the book feels more immediately uncanny and sinister: Vision has created a family in his own image, part of his continuing efforts to become more human (more “normal” as he frequently puts it), a venture that is destined to end in catastrophe as the ominous opening captions in the very first issue candidly, wickedly declare.⠀
⠀
The comic has been hailed as “𝘙𝘦𝘷𝘰𝘭𝘶𝘵𝘪𝘰𝘯𝘢𝘳𝘺 𝘙𝘰𝘢𝘥 with r̷o̷b̷o̷t̷s̷ synthezoids,” which also means that it’s not exactly what you might call a happy book. Much like that story and those it inspired (like 𝘔𝘢𝘥 𝘔𝘦𝘯), 𝑻𝒉𝒆 𝑽𝒊𝒔𝒊𝒐𝒏 is a dark, cerebral, meticulous tale of melancholy, anxiety, and the sheer harrowing grace of human nature — viewed through the eyes of an artificial superpowered being who may just be exactly like us.⠀
⠀
It’s also a book that perfectly illustrates the notion that you can tell literally any and every type of story with superhero comics. If 𝘞𝘢𝘯𝘥𝘢𝘝𝘪𝘴𝘪𝘰𝘯 explores even a modicum of the terrain laid out in this comic book, then we are in for a curious, wild treat indeed.