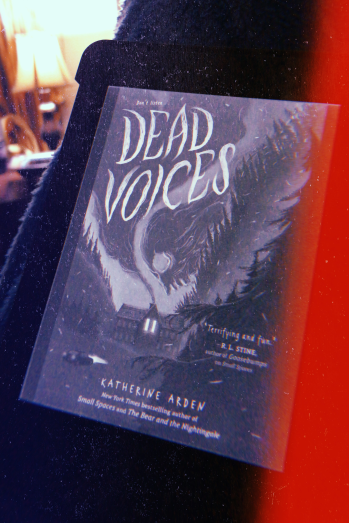 I’ve read enough middle grade horror to know that a lot of the books within the genre are mostly harmless, spooky fun. There are a lot of conspicuous exceptions, of course, but for every Coraline there are at least a hundred Goosebumps (and, look, I love Goosebumps as much as the next reader, but let’s be real — it’s mostly goofy and schlocky fun).

Katherine Arden’s books fall more towards the Gaiman-end of the spectrum. There’s still no “real” horror here, but what Arden does deliver — and in abundance — is atmosphere. Which is fine by me: the spooky stories I find most effective are those defined by ambiance rather than terror — and Dead Voices, the second book in the Small Spaces series, has ambiance to spare. Arden’s language is beautiful, her descriptions chilling and commanding. There are passages here so vivid that I could almost feel the New England cold down in my bones (which is — as I mentioned in my previous review for Pumpkinheads — quite the feat when you consider I live on a Caribbean island in the midst of one of its hottest years on record).

A follow-up to last year’s excellent Small Spaces, Dead Voices sees our trio — principal protagonist Olivia, stoic and reliable Brian, and bubbly-but-insecure Coco — and their respective parents on their way to a skiing trip to a local Vermont mountain. They are soon overwhelmed by a particularly strong snowstorm however, and find themselves stuck inside the vast and newly renovated lodge in which the are making their stay.

Arden has mentioned in interviews that one of the main inspirations for this story is The Shining, which should give you some idea of what is to come.

As I mentioned above, mood and setting are what sets this story apart, but it also features charming, believable, and resourceful characters, and it’s very easy to root and feel for them. Particularly great is Ollie’s father, Roger, who had a small part in Small Spaces but a much expanded role in this book. A widower trying his best to raise a daughter as a single parent. A cook and lover of puns. Someone trying to kindle a relationship with someone new while still grieving an old flame. His is a realistic, rounded, and sympathetic portrayal, and a welcome breath of fresh air in a genre where parents are mostly absent or absent-minded.

Lyrical and atmospheric, Dead Voices is much more than a worthy sequel, and a great Hallowe’en read.