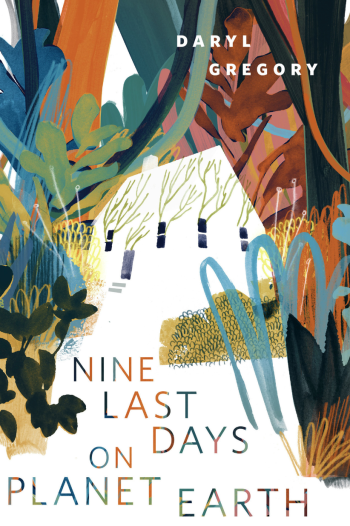 Some topical reads for this most disquieting of weeks. ⠀

The day was too big for small emotions.⠀

I’m a mood reader, as I’ve mentioned before, and my temperament hasn’t been the best these last few days. World news have done a number on my anxiety, and the frustration that comes from feeling powerless hasn’t helped assuage it any, let me tell you. It’s been a bleak week, essentially, and I was looking to read something dreary to match my current disposition.⠀
⠀
This turned out to not be that read. Thankfully enough.⠀
⠀
Nine Last Days on Planet Earth is a compact and concise novella by Daryl Gregory that does what it says on the tin: it tells nine tales about main character LT, through whose eyes we see the gradual unraveling of a slow alien invasion. As a boy in the American South he witnessed a seemingly endless meteor shower that went on to wreak havoc all over the world. When the smoke cleared, humanity found that these rocks from space were actually seeds, which soon began to sprout forth countless of strange new plants. Over a slow amount of time, some of this alien vegetation begins to throw Earth’s ecosystem off-kilter, causing considerable amounts of damage, while others seem to just… be there, harmless and passive. ⠀
⠀
LT is one of the most wonderfully-realized viewpoint characters I’ve come across in a while. Over the course of the nine stories we see not only his interest in this unfathomable new flora blossom, but his personal life as well — from his growing estrangement from his family, to his burgeoning sexuality, to his establishing of a family life (additional points to positive and wholesome queer representation, here). And through LT’s personal life we see how the world has changed. ⠀
⠀
In Captured Ghosts, a documentary about his work, writer Warren Ellis talks about the concept of the “novum” in science fiction stories, which is, essentially, the Big New Thing that happens that causes the world to change forever. The thing that disrupts normality. In Nine Last Days we explore this nova event — in a slow, incremental fashion, much like a plant grows — through LT. Through him we see how humanity has adapted. Which of course it has. ⠀
⠀
There’s a lot of mystery surrounding these space plants — where did they come from what do they do were they sent here and why and by whom — which forms a lot of the tension of the story. But perhaps the most shocking thing about it all is how any answers we might or might not get are essentially inconsequential. Because the world has accepted it and moved on. Life found another way. ⠀
⠀
This novella, you see, is less to do with annihilation of mankind (the “last days” of the title refers not to any final stage of life, but to concluding personal experiences) and everything to do with how we deal with the perplexing and the unexplainable (which is to say: most things this weird, wild world throws our way). We adapt. We change. We evolve. And we go on.⠀
⠀
And so Nine Last Days on Planet Earth ends, as these stories so often do, on a note of hope. ⠀

Words were not required. Sometimes the only way you could tell someone you loved them was to show them something beautiful.

Take care out there. Be safe. See you on the other side of the nova.