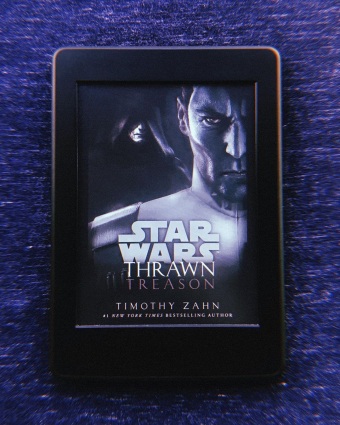 December is for Star Wars.⠀
⠀
I really enjoyed Zahn’s return to his iconic character in the first book of this series. Getting a story from the point of view of a character that essentially boils down to “Sherlock Holmes but uh even more alien” makes for some fun reading.⠀
⠀
I enjoyed the second entry, Alliances, a fair deal more. Telling that story in alternating chapters first with Thrawn and Vader and then with Thrawn and Anakin made for a really dynamic story, and I enjoyed how their interactions were written. We all know Vader’s story. But we also know that Vader and Anakin are two distinct personalities, and Zahn did a great job highlighting that. We also got a fun romp of a storyline with Padmé who is still to this day in the canon, severely underutilized. ⠀
⠀
Which all makes Treason feels slightly disappointing. It’s still an interesting and fun read. It just feels inconsequential to the story at large. (Some spoilers ahead here.) It takes place in a single week, before he and Ezra and a bunch of space whales take a hyperspace jaunt to who knows where, and knowing that robs this story of any dramatic tension. It was also a little too military SF for me, which is a genre I don’t particularly enjoy. That military aspect has always been there (Thrawn is a Grand Admiral in an Empire, after all), but, at least with the two previous stories, I felt like it was more of a background element, a method Thrawn embraced in order to get what he wants. Here, that facet is brought to the foreground, and Thrawn himself is the one drawn back to the shadows.⠀
⠀
There were still some things I really liked. Eli Vanto was a character I particularly enjoyed, and it was nice to catch up with him. Admiral Ar’alani and Commodore Faro are just badasses, and I hope we get more of them in the future. And I liked the bureaucratic and whiny Ronan, this story’s miniature version of Director Krennic. He has one of the most prevalent roles in the story, so it’s a good thing that his arc is also one of the more interesting. ⠀
⠀
Not as good as the last two books. Still fun. That feels as much a part of Star Wars as anything else. ⠀

○
⠀
December is for Star Wars. Between this and The Mandalorian (which I’ve been really loving), it’s been nice to wade back into the waters of a galaxy far, far away, before taking the full plunge next week with The Rise of Skywalker. I already have my tickets. I hope you do, as well.