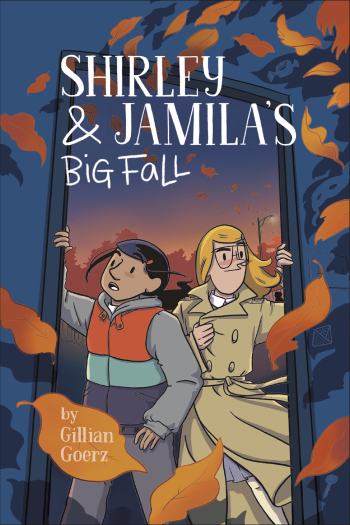 After their summer adventure, friends Shirley Bones (kid detective extraordinaire) and Jamila Waheed (new spunky kid on the block) prepare themselves for the school daze ahead. It turns out to be a busy term, and between all the extracurriculars, the friends find themselves with limited time to hang out together. Jamila in particular struggles to find new friends, being the new kid, until she meets Seena while trying out for the local basketball team. Like her, Seena is of Pakistani descent, and the pair form an instant connection over their shared cultural quirks. Jamila worries that her budding friendship with Seena will affect her relationship with Shirley, since the two couldn’t be any more different. Add to that the fact that Seena seems to be hiding a checkered past….

Seasoned sleuth Shirley Bones has no time for interpersonal drama, though — not when there’s a case to crack. A loathsome sixth-grader by the name of Chuck is known throughout the school as a notorious blackmailer. Possessing a veritable hoard of incriminating pictures, videos, and text messages, he lords over his  classmates, extorting favors in exchange for his presumed silence, lest he ruin their elementary school careers. Bones and Waheed soon make it their mission to take down the crooked character’s coercive enterprise.

I had an absolute blast reading Shirley and Jamila Save Their Summer, the first book of this seasonal series, last year. It helped that I picked it up knowing next to nothing about it, other than it involved kid detectives. So I was pleasantly surprised when I realized, halfway through the book, that the series was a Sherlock Holmes reimagining! It’s not overt from the outset (in fact, I don’t think even the blurb mentions it) so I had a lot of fun going back through the story and picking up all the references and homages, most of which seemed obvious in retrospect (the assonance of their names, for one). In a world saturated with interpretations of this world and its characters, this one in particular felt like such a fresh and clever take. I finished it eager to get back into this story.

I’m happy to report that I also had a blast reading the sequel, Shirley and Jamila’s Big Fall, and in fact would say that I liked it a bit more than the first book, if mostly because of the gorgeous autumn setting, which I am always a sucker for. This one is based on “The Adventure of Charles Augustus Milverton,” a story famous for featuring a villain that was even more revolting than Sherlock’s traditional nemesis, Moriarty. (Fans of BBC’s Sherlock will no doubt remember Lars Mikkelsen’s brilliantly repulsive portrayal of the character in the show’s third season.) Chuck is a great and outrageous juvenile analogue of the character, who, instead of doing the things he does for power and influence, here he’s just an overly privileged, pretentious child who has never been denied a thing in his life. It was a lot of fun to watch his machinations being undone by Bones and company.

Goerz’s character work is wonderful. The supporting cast in the first book was a highlight, and although I’m sad to see they don’t play a role in this story, the newcomers are also immediately endearing. Seena is the obvious standout, but her family is also a delightful addition. That familial aspect is another thing I admire about these books. Middle grade stories tend to do away with grown-ups in some form or another, but in Shirley and Jamila’s lives, they are not obstacles to overcome, but integral. It’s a nice and lovely change of pace.

The artwork remains exceptional. Goerz draws people in a simplistic style that’s very reminiscent of Raina Telgemeier’s work, but her characters are a lot more expressive. They are never static — their faces and postures change constantly throughout the pages and panels, lending the story a dynamic feel. But Goerz in particular excels at scenery: her backgrounds are beautiful and incredibly elaborate, positively bursting with fun little details. They are also super cozy, which is only appropriate, given the autumnal setting (the aesthetics of Seena’s family apartment are goals, as the kids would say). I usually fly through graphic novels, but I consciously slowed down while reading this one, the better to appreciate the art.

All in all, another highly enjoyable adventure featuring two intrepid sleuths that are quickly becoming favorites. And I can’t wait to see what surprises Winter has in store for them.