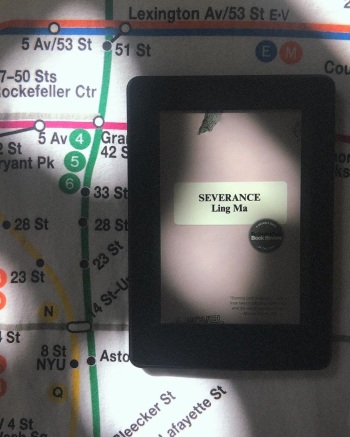 Severance follows Candace Chen as she tries to live in a world that has fallen after a slow plague (imported from China, of course) renders those infected into, essentially, the walking dead.⠀
⠀
This isn’t a zombie book however. At least not traditionally. Ling Ma’s zombies — called fevered here — are not brainless monsters, looking to devour flesh. No, the fevered here are simply humans, cursed to the routine of their previous lives. The fevered do the dishes. The fevered scroll through their phones. The fevered drive and go to work and then they go home. And they do this over and over and over. Stuck on a loop, until their bodies give out.⠀
⠀
The fevered, you see, are just like us.⠀
⠀
With Severance, Ling Ma has written a scathing satire about modern life, office/hustle culture, and gross, unchecked capitalism, all without succumbing to the tired sort of lectures favored by all Boomers, e.g., “technology is bad fire is scary Thomas Edison was a witch.” Instead, Ma opts for the more realistic and nuanced approach of letting us know that, actually, we make our own apocalypses. That what we let into our lives, the habits and routines we choose for ourselves, can often spell out our damnation just as well as they do our salvation (or vice versa).
⠀
This theme is characterized in Candace, our flighty but practical and stubborn main character, whose life is essentially saved from the apocalypse by the dreary routine that also forced her to push her dreams and ambitions aside in exchange for safety and comfort. She keeps waking up and washing her face and going to work. Even after her co-workers abandon theirs job and the office building is emptied out. Even after New York turns, essentially, into a ghost town.⠀
⠀
Sometimes we make our own apocalypses. Often so that we can just live.⠀
⠀
Candace decides to leave, mostly because she locked herself out of the office. On her way out from New York, she meets and joins up with another group of survivors on their way to Chicago where the group’s leader — a pompous, pedantic, despot-in-the-making, because even after the world ends you cannot escape these dudebros — assures them there is a safe place he calls “the Facility.” There, he tells them, they can live in relative comfort and, hopefully, begin to rebuild civilization anew.⠀
⠀
Interspersed through the core narrative, are stories from Candace’s earlier life, up to and including tales of her parents, who immigrated to the US when she was just six years old, and the challenges they faced as the simply tried to live. Because this is an immigrant story as well, and how often they are seen as outsiders, even — and especially — when the outside world has crumbled and fallen. ⠀
⠀
Sometimes we make our own apocalypses. Sometimes, the apocalypses just happen to you.⠀
⠀
I didn’t expect Severance to connect with me as much as it did, although considering all the things we are currently going through in the world right now, and the fact that my generation as whole seems to be perpetually caught in a quarter-life crisis, that I would find relevance in a post-apocalyptic novel shouldn’t really be that surprising. ⠀
⠀
There’s a small category on my Goodreads called “zeitgeist fiction” where I collect stories I think encapsulate the general “feeling” of a particular era. There’s no clear and set definition, it’s entirely subjective (the Scott Pilgrim books are in there, for instance, as is Rona Jaffe’s The Best of Everything). Severance, with its surprising and poignant explorations of the immigrant experience, loneliness, nostalgia, and just modern 21st century life in general, was immediately added. I’m having a hard time thinking of any other recent book that captures the spirit of our current age so clearly and so cleverly.