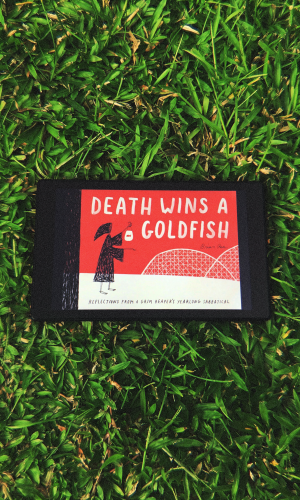 Death Wins a Goldfish is a book about living, author Brian Rea writes in the introduction. More specifically, it is a book about Death living.⠀
⠀
In the world presented in this story, Death works, like so many of us, in a cubicle farm (in an office full of other grim reapers). He lives for the job, so to speak. He’s been doing it for so long, after all, and without a single pause. But one day he receives a letter from Human Resources informing him of the fact that he has a year’s worth of vacation days accumulated, and that he must make use of them.⠀
⠀
So Death takes a holiday. Only he has no idea what to do with all the time that has been given to him. Dedicated as he’s been to his occupation — defined by it, you could say — he never quite managed to build a life outside of it. And so we follow Death along as he tries to figure out how to best go about living.⠀
⠀
This is a picture book, although it is decidedly not intended for kids. Not because there’s anything explicit about its illustrations (which are fun and clever and charming in their rushed, scratchy quality), but because it deals with topics relatable mostly to us adults who may or may not feel as if their job occupies too much of their personal identity.⠀
⠀
Like Death, I work as an office drone. And while I appreciate the stability and structure that it gives my days, one of its main challenges has always been having some semblance of a life after I clock out at the end of the day. The job is not hard, physically speaking (back pain notwithstanding), but it is certainly mentally draining. When I get home, oftentimes the only thing I want to do is shut off my brain, do nothing but unwind and rest before heading back into the office the next day.⠀
⠀
But I don’t want to let myself — my life — get stagnant. So I make routines. I carve out time to work out; to hang out with my partner; to read; to write a little. I try to make the best use of my time as possible.⠀
⠀
Not that I’m always successful at it. Some days I don’t even bother with any of that.

⠀
And that’s fine, too. Mileage varies, as it often does. Later on in the introduction, Rea offers a piece of advice given to him by a former mentor: learn when to row your boat, and when to rest your oars. In our current society, however, where hustle culture is so prevalent, constant productivity is placed on such a large pedestal that you can be easily excused for thinking it’s the only path towards having a successful, meaningful life. There are no hobbies — there are only side jobs. There is no downtime — every waking moment is an opportunity to be productive. Your life gains meaning only by putting in the work.⠀
⠀
But that path only really leads to burnout. It’s not sustainable. And more importantly, it’s just not how people work. How life works. As with all things, there’s a balance that must be struck: You have to learn when to row. You have to learn when to rest.⠀

—
⠀
Reading this book now, though, in the context of our current situation, was interesting, to say the least. It gave it an unexpected new layer. Those of us whose jobs have been deemed non-essential now find ourselves at home with all this free time suddenly dropped on our laps. It’s a weird situation in which to be, confusing and also somewhat overwhelming. It can even get a little existential: Who are we when something that takes up so much of our lives gets taken away? How do we fill our time when we now have so much of it?⠀

All we have to decide is what to do with the time that is given to us, as Gandalf once said. It’s the theme Death Wins a Goldfish explores, and we could do worse than to emulate its findings. We can’t, of course, currently do all the traveling and outdoor activities Death does in this story (my favorite being the running of the bulls — although I don’t approve of the practice). 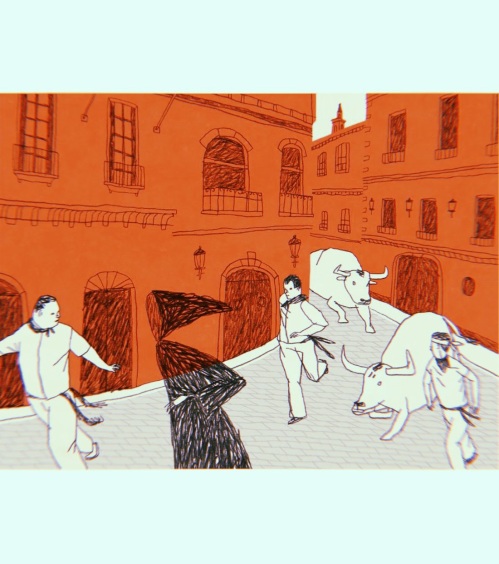 But we can read some books. We can make some art. We can take care of our loved ones (pet fish certainly count). We can rethink our lives and our worldviews. We can look within and work on ourselves.

We can, in other words, work on living, while we’re still able.

Or we can just rest. That’s as much part of life as anything else.