At the beginning of this book, Gene Luen Yang, high school teacher and acclaimed author of graphic novels, is worried that he has no more stories to tell. He’s felt a hole in his life since his last book was released, and that was over six years ago, but he’s unable to find a story that just grabs his heart and runs away with it.⠀
⠀
Until he starts hearing the excitement in the hallways of Bishop O’Dowd High School. Their basketball team, the Dragons, is set to go to State and is causing quite the stir. Yang does not follow basketball so he has no idea what this means, but the hold it has on other people fascinates him, and he starts to think there might be a story there. He’s hesitant at first — the computer science teacher and comic book guy writing about sports of all things? But he feels the hook in his heart and so, tentatively, he takes the first step.⠀
⠀
Dragon Hoops is the true story about a basketball team overcoming all manner of odds on their way to becoming champions. It’s about the people that make up the team, and their stories. And its about the rich history of the game they play.⠀
⠀
A game in which, when I first picked up this book, I had next to no interest in, it having gone away in the aftermath Space Jam and Michael Jordan’s second retirement. Which, for me at least, made Yang the perfect audience surrogate: he begins his journey caring not much for the game but for the stories it generates. He ends it, not exactly a superfan, but as someone who now appreciates basketball and its deep cultural importance.⠀
⠀
Which perfectly mirrored my own journey with Dragon Hoops. There’s a reason why after finishing the book I: read Phil Bildner’s A Whole New Ballgame; have been keeping up with The Last Dance documentary miniseries on ESPN; bought Kwame Alexander’s Crossover; and, yes, re-watched Space Jam (still a masterpiece).⠀Like Yang, I haven’t become suddenly a superfan — I don’t think I’ll sit down and follow every single game once they start back up again — but I am definitely more interested in it, and appreciative of its history, and of its cultural impact.⠀
⠀
There’s just so many things Dragon Hoops does right for me. On the surface it’s just your typical tale of a team on its way towards victory. It’s a story we’ve seen countless times before. But the difference, as always, is in the telling:⠀
⠀

It’s a story about basketball, but it’s also a perfectly accurate portrayal about the agony and joy of writing. We get to see Yang as he tries to write the story while the actual story unfolds. We see him struggle with what to add and what to omit as the action plays out in front of him. He talks with the people he’s portraying about how they should be depicted, and we see the changes in the art during these conversations. He even addresses the reader at one point. Which is one of the advantages of this being a graphic novel: these are all things you can pull off in comics that you can’t easily do in other mediums. And by this point in his career, Yang has such a handle on sequential storytelling that he takes full advantage of the form here.⠀(The art, despite all the times the author disparages it as inadequate in the book, is wonderful. Yang’s form is clean and clear, and it translates surprisingly well into the dynamic basketball scenes.)

⠀
It’s also a story about stories. A handful of chapters are focused on key members of the team. Preceding their stories however, we get a short history lesson on the game of basketball, which are fun and fairly informative: we learn why the game of basketball became so popular with minority communities and in the inner cities; we learn that women have always been playing the game pretty much since its inception; we learn the myriad ways different people took steps to take the game forward; and we learn many other things besides. The most interesting and impressive thing Yang does with these brief classes, however, is showing how their lessons are still relevant to the life of the individual being discussed in the chapter, thus creating a direct link between the past and the present. It’s very effective and probably my favorite thing this book does.⠀
⠀ 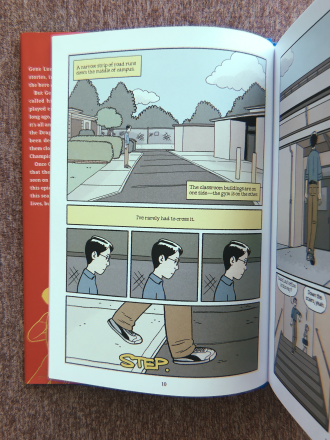 Tying all this together is the recurring image of stepping forward. Each and every person in this book, author included, is facing a set of challenges, varied as the people themselves: trying to win a basketball game; trying to decide whether or not to take a job offer; forming new friendships; balancing relationships; prejudice (in all its infuriating forms); how to best tell a story. And the thread that runs through each and every person facing these obstacles, from the past to the present, no matter how uncertain or how scared they were, is that they took a step forward. They stepped into the court. After all, how else are you going to know what happens unless you play the game?⠀