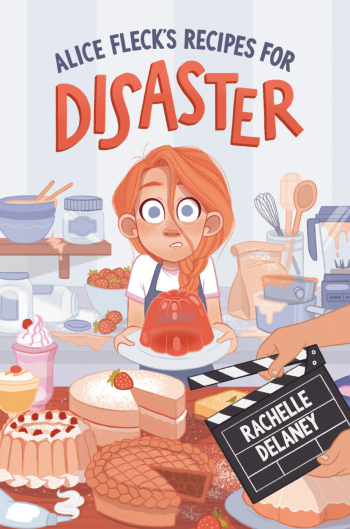 Alice Fleck has two main loves in her life: her father and food. Her dad is a culinary historian and cooking is how they bond and connect. They recreate dishes of ages past for fun. When they are not in the kitchen, they are watching their favorite cooking competition show, or reading dusty cookbooks full of esoteric recipes and gastronomic facts. They have a routine, and Alice has settled into it comfortably.⠀
⠀
Until her father’s new girlfriend shuffles into their lives and proceeds to shake everything up. Alice has trouble adjusting to sharing her father’s attention with a veritable stranger — an irritation that is only aggravated when Hana, the new love interest, signs Alice and her dad up to compete in the latest season of 𝘊𝘶𝘭𝘪𝘯𝘢𝘳𝘺 𝘊𝘩𝘳𝘰𝘯𝘪𝘤𝘭𝘦𝘴, their favorite show, taking place in a nearby fancy estate (which also happens to be hosting a Victorian festival).⠀
⠀
Cooking in a competitive environment is more than enough change for the Fleck’s. Once they arrive, though, they are further distressed to find that the wholesome, good-natured cooking show they both know and love has been completely overhauled, now styled as yet another cutthroat cooking competition, judged by an infamous chef known for his biting, ruthless remarks.⠀
⠀
The contest is soon underway, but a series of consecutive mishaps with the competitors leads Alice and her newfound friends — budding detective Henry Oh and spirit enthusiast Octavia Sapphire — to suspect sabotage, and take it upon themselves to solve the perfidious plot before it threatens to ruin not only the show itself, but potentially Alice’s relationship with her dad.⠀
⠀
Culinary history! Cooking competitions! Historical festivals! Victorian ghosts? Sherlock Holmes?? Bartitsu??? Mysteries! ⠀
⠀
If all that sounds like a lot — it’s because it sort of is! Mixing just one or two of those elements would have been enough to cook up a fun middle grade adventure, but author Rachelle Delaney daringly decided to go big or go home and opted to just throw every single thing into the broiling pot.⠀
⠀
It’s a move that would easily overwhelm any other story — and indeed if there is one criticism I can give this book is that the first half, which introduces most of these pieces almost all at once, feels a bit overstuffed — but, like any decent chef, Delaney manages to make something delightful out of all these seemingly incompatible ingredients. Alice Fleck’s Recipes for Disaster is a charming concoction, full of clever, charismatic characters, and I had a blast reading it.