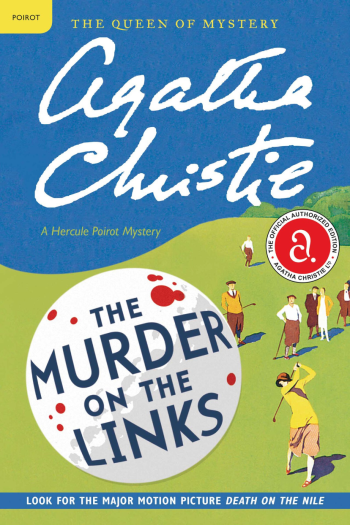 Disappointed at the severe lack of golf-related hijinks in this, but other than that Agatha Christie’s The Murder on the Links is an utterly fun and thoroughly twisty ride.⠀
⠀
I’ve been working my way through the Poirot novels out of order, picking up whichever one happens to catch my fancy at the time. It wasn’t until I read the back matter that I realized that this particular book was only the second entry in Poirot’s mysteries, and, having read a couple of the later novels, I was just impressed with how much of a complete character he seemed even this early on. One would assume that in a long-running series such as this one the defining characteristics of the protagonists would emerge gradually and organically over time. But Poirot seems clearly defined from the outset. The reliance on psychology over physical evidence to solve crimes; the emphasis on using one’s “little grey cells”; the general air of outlandish grandiosity and pompousness. It was all there from the start. Good show, Christie.⠀
⠀
Anyway.⠀
⠀
A fun fact about me is that my godfather was an amateur golf player and used to take me out to play when I was a kid. I had my own set of small golf clubs and everything. It was adorable. I inherited his regular-sized clubs after he passed on. They’ve all regrettably been lost or thrown away through the years due to my own carelessness, but I still have one huge driver that I keep in my room. It has the name “Big Bertha” engraved on it. I’m convinced she would make an excellent weapon in a murder mystery. Someone get on that. My gift to you. ⠀
⠀
Also yes I one hundred percent read this after watching Knives Out for the hundredth time.