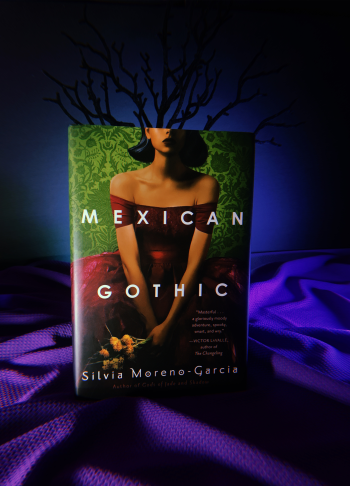 I started Silvia Moreno-Garcia’s Mexican Gothic for Hallowe’en last year. I was enjoying it, too, noting how Moreno-Garcia had the Gothic undertones and atmosphere utterly down. But then I dropped it, and I couldn’t quite tell you why. Well, I could: there was a pandemic going on, sucking the joy out of everything and anything at the drop of a hat. It was — and still is, depressingly — a thing. So I decided to leave it for this next Hallowe’en season, and as it approached, I found myself excited to pick the book back up again.

You can imagine my disappointment when I found that I did not enjoy it as much as I expected. Which is nothing but a shame as all the elements were still there: Moreno-Garcia’s writing is gorgeous, pitch-perfect in its baroque tone and flowery wordage; the atmosphere — atmosfear — it evokes is palpable and practically seeps from the page; Noemí, our intrepid bon vivant of a heroine with the quick wit and indomitable will, is simply marvelous; its villains are suitably abhorrent, showcasing as they do a grotesque version of white entitlement towards other culture’s religions and lands and bodies; the story’s central theme of colonialism and its ruinous blight of a legacy is one that quite literally hits close to home as someone who lives in an actual modern day colony.

And yet… it didn’t quite connect with me. Perhaps that was because of the above-mentioned epidemic exhaustion; but more likely it was just that the story felt distant, with too many of its true horrors told rather than shown; evils obscured rather than exposed. Moreno-Garcia keeps her protagonist in the literal dark for much of the novel, and at arm’s length from many of the other characters, a detachment the reader feels by extension. A dense fog envelopes High Place, this story’s setting. At times it felt like a similar gloom shrouded this novel, and perhaps it just proved too thick for this particular lector to penetrate.

Whatever the case may have been, Moreno-Garcia’s prowess is undeniable, and I don’t regret reading this weird, visceral, phantasmagoric vision of hers.