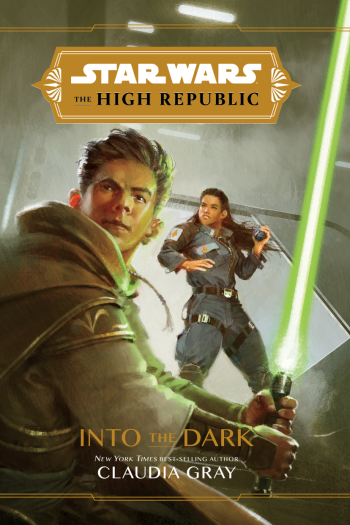 Publisher’s summary: Padawan Reath Silas is being sent from the cosmopolitan galactic capital of Coruscant to the undeveloped frontier—and he couldn’t be less happy about it. He’d rather stay at the Jedi Temple, studying the archives. But when the ship he’s traveling on is knocked out of hyperspace in a galactic-wide disaster, Reath finds himself at the center of the action. The Jedi and their traveling companions find refuge on what appears to be an abandoned space station. But then strange things start happening, leading the Jedi to investigate the truth behind the mysterious station, a truth that could end in tragedy….

Claudia Gray is my absolute favorite Star Wars writer. From Lost Stars to her Leia books to Master and Apprentice, I have enjoyed her forays into this galaxy far, far away.

Which only makes it more of a shame that I really couldn’t get invested in Into the Dark, her first entry into the High Republic era.

Don’t get me wrong: Gray continues to be an excellent Star Wars author. She’s included here a bunch of characters that I loved (bookish Padawan! space Matthew McConaughey! a sentient rock!). And Gray continues to write about the Force better than any other author — I highlighted a great many lines from this novel.

But still, the story felt a little lacking.

It’s a by-product of being part of a multi-platform storytelling project, I suppose. The main story of Star Wars: The High Republic is being told through a trilogy of books, while a slew of stories told through audiobooks, comics, YA and middle grade novels acting more or less as support and supplementary material. And it’s this extra content that seems often to get bogged down by too much continuity noise and baggage that spins out of the primary plot line.

And it’s also because this novel just largely lacked Gray’s opposing outlook angle that is present in most of her works: Lost Stars (literal star-crossed lovers, one of whom is a Rebel, the other an Imperial); Bloodline (Leia, the rebel senator, begrudgingly teaming up with someone who holds an entirely different ideology); Master and Apprentice (Qui-Gon’s mystical approach to the Force at odds with his Padawan’s more pragmatic, traditional take). We find it even in her non-Star Wars work, such as in Defy the Stars (two people on opposing sides of a war fall in love). It’s a technique that Gray particularly excels at, allowing her as it does to better explore the gamut of the tensions and conflicts that make up a proper pulp narrative, making for a more involved and compelling read.

We get hints of that in Into the Dark — Jedi Masters feeling conflicted towards the Order’s austere methods; a Padawan questioning the path laid out by their Master — but it’s not the engine that drives the plot, and I found myself thinking it would be a richer, more substantial story if that were the case.

Regardless, Gray has only been adding great things to Star Wars’ already significant lore, and I hope she gets to do so for a long time. I’ll still be there reading every step along the way.